Burning the midnight oil? Or was that epoxy?

I bet the racers at the last CACC race did not notice that the pit lane timing loops were not working. Thanks are due to John and Ryan, as they manually worked around this problem throughout the weekend. Kudos to them.

But the loops needed to be replaced ASAP. The system was needed on Thursday for a time attack event so there was no time to waste. Parts were air expressed in and all the materials were assembled for the Wednesday evening work party.

President Ray along with our timing and scoring duo John Cathie and Ryan Richman rolled up their sleeves and worked in the heat to get the job done. New grooves were sliced into the pavement to install the wire loops and new weather-tight electrical boxes were assembled and placed. Cable loops were assembled and routed through new conduit runs.

With all this new protection it is hoped that it will be a long while before there is the need to do this again. The evening’s work ended at 11PM with the pouring of epoxy resin to seal the cable into the asphalt. It was a challenge to pour and swat mosquitoes at the same time. The system was quickly tested, and the tools were put away with final details to be done another day.

Thanks to Ryan and John for their expertise and donation of time and materials. SCCBC is very fortunate to have such dedicated volunteers. 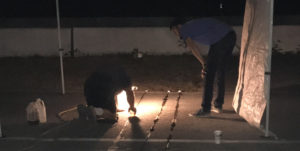